Welcome back to another review of ‘GT’. In this episode, Florida accepts a lunch invitation from her boss, making James plenty jealous. Hope you enjoy the review.

J.J. was yelling for Thelma to come out of the bathroom so he can get in. when he didn’t get a response, he counted to three for her to get out. He started with 1, then 2, then Florida emerged from the bathroom and she said ‘You wanna try for three’. when he apologized for yelling, Michael sneaked in and J.J. asked Florida not to let him get away with it, she answered that was his problem, as she had to prepare breakfast. James came out with a loose button on his shirt and wanted her to sew it on. James asked her why she waited to take a bath that morning instead of the night before, she answered she was too tired form inventory and he was taking his bath. Thelma came out and complained about Florida not ironing her clothes and leaving them out for her. She told her to wear a skirt and blouse, J.J. said the guys would laugh at him. Michael came out of the bathroom and asked Florida to write his permission letter to go on a field trip that day. she had him write it and she’d sign it. During all this, Thelma snuck past J.J. for the bathroom. James was getting angry because she wasn’t doing his button properly through all the turmoil. Michael pestered Florida about how many m’s there were in permission, or to end the note, sincerely yours or yours truly. Thelma came out asking her if she saw her makeup and hair spray. J.J. yelled ‘AT LAST’ and ran in the bathroom.

A frustrated Florida left for work (since when did she have a job, James was too proud to let his wife work). She told James to take over for her at home, see how he felt being a housekeeper, diplomat, referee, counselor, cook, seamstress and sparring partner, all free and no benefits. She ran into Willona outside and complained about how the family took her for granted. She looked up to Lincoln and said ‘you freed our people but you forgot me’ Willona invited Florida to have lunch with her and spill her guts. Florida stated that was the second lunch invitation she turned down. The first was from Mr. Harris, the head of her department at the department store. The purpose was to celebrate the success of their inventory. Willona talked her into reconsidering and accepting his invitation after all. She and Mr. Harris went to a Japanese restaurant. Not knowing much of oriental customs, she was surprised they had to sit on the floor. When she sat on the floor pillow she fell backwards so the hostess used a chair to make her more comfortable. Mr. Harris ordered sushi and sashimi to start off. He complimented her new dress and complimented the job she was doing at the store. He also had to translate many of the foods they were eating. She then told him about a tin whistle her father got her in a crackerjack box that she lost and unfortunately never found another one. 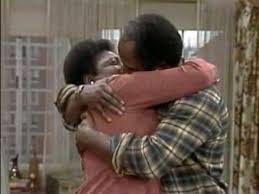 That evening, James ordered chicken and ribs from J.J.’s job and he came to bring it over when he finished work. J.J. used his regular pitch when he was at the door with Thelma. James was going on about how he didn’t want Florida copping an attitude when she got home and she better appreciate the meal. Florida came home in a good mood and was singing. James starting giving her the third degree why she had the sudden mood change. Michael told her he got a C on his English test. Instead of being upset, Florida said he’d get an A next time. Mr. Harris came to the door and reminded her to call him Oscar. He brought her some Japanese flowers and a whistle after he bought a bunch of crackerjack boxes. James questioned what they did during lunch and when Mr. Harris said Florida got comfortable once they got on the floor, giving James the wrong idea. She invited him to stay for dinner but James said there wasn’t enough food. He declined, saying he had another dinner engagement. After he left, Florida explained to James that Mr. Harris treated her politely and courteously and gave her the attention a woman wants to get. She also stated she didn’t want to be just a habit with him and asked James if he loved her, he answered that was a silly question. She asked him for a silly answer and he kissed her. She blew her whistle to call the kids for dinner and then to get rid of them quickly thereafter.

Another good episode, although it seemed quite similar to the second season episode “Florida Flips”. Now that Florida has a job, the only other time was in “Florida’s Big Gig “, when Florida was hired at a department store over James. Also, Thalmus Risulala played Oscar Harris, Florida’s boss. He previously played Ernie Harris in the episode “The Houseguest”. Maybe they were identical twin brothers. James was always a loving a devoted husband. he never considered Florida as anything less than a woman. I didn’t quite understand why she felt like he did.