Welcome back friends and fans. Here we have for you another review of GT. This episode deals with Michael getting drafted into a local street gang, The Junior War Lords. Hope you enjoy the review.

Michael came in through the door breathing very heavily, then chained the door behind him. Then went to take a drink of water. Florida and Willona come by a few minutes later, demanding he open the door. Michael took his jacket, which belonged to the Junior War Lords, and put it in the oven. The phone rang and Michael grabbed it. He was worried that one of the guys from the gang called to cuss him out. Willona announced she was going home to get her punch bowl. Michael asked what the punch bowl was for and Florida answered she and some concerned parents were meeting. J.J. came home with a barbecued pizza for the meeting. He depicted that the Junior Satan Knights ambushed his truck, stole some spare ribs, along with a spare tire. Florida let on about how uncivilized these kids in gangs were. J.J. stated they were like altar boys compared to the Junior War Lords, they would rip your ribs right out of your chest, causing a shocked reaction from Michael.

The phone rang again but J.J. answered. It turned out to be another call from Thelma. J.J. started telling him off and cause another worried look from Michael. when he said Thelma wasn’t home, Michael breathed a sigh of relief. Thelma came in and J.J. got on her case about her high volume of phone calls. She said she had to study biology, psychology and mythology. J.J. summed it up with biology described her body, psychology described her mind and mythology described her face. Clara and Mr. Parker, two concerned parents, showed up. They were to discuss the gang problem in the neighborhood. They were vandalizing the school, threatening the teachers and beating up students. The school couldn’t do anything and the law wouldn’t. Nettie came in and said her nephew, Tommy, who was a friend of Michael’s,  got beaten up by the Junior War Lords. Nettie got a call from her sister, she stated Tommy had a fractured skull. Mr. Parker suggested they grab some baseball bats and attack them. (Yeah right, that would have only cause more trouble). Florida asked J.J. to warm the oven up for the pizza. Michael went to do it but Florida insisted J.J. do the chore. When he did, he found Michael’s jacket burning in there. 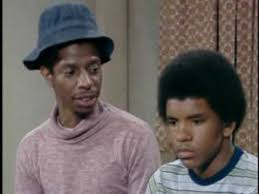 Florida demanded to know who the jacket belonged to. J.J. said ‘it ain’t mine’ and Thelma said ‘it ain’t mine’. Florida said she needed to hear one more ‘it ain’t mine’. Willona came out and said ‘it ain’t mine’. Florida, needless to say, said that wasn’t the person she wanted to hear it from. Michael admitted it was his jacket. Mr. Parker berated Florida for being unable to stop Michael from joining the gang (like that couldn’t happen to one of his kids). The other guests left and Florida felt embarrassed. Michael, at first, claimed they were a social club as opposed to a gang. J.J. said their way of socializing is having coming out parties for your teeth. Florida demanded to know why Michael joined the gang, his first answer was because he was tough. Florida refused to buy it so he admitted they beat up two of his other friends for refusing to join and when they cornered him, he was afraid they’d break his neck. It turned out he only joined because he was afraid.

J.J. went inside to talk to Michael about the situation because he knew where Michael was coming from (remember, J.J. was in a gang too). He told Michael he understood about how these gangs are and what they do to people who don’t join. J.J. also said being afraid was nothing to be ashamed of for he claimed to be the biggest coward. Michael told him when the gang jumped Tommy, Michael was just punching at the air until Tommy went down, Michael just ran home after that. He told J.J. he needed to get out of that gang and, first, go see how Tommy was. J.J. offered to go for him. Michael then told Florida he was throwing the jacket in the incinerator in the hallway but Thelma noticed he took his coat. She then stated Michael would probably take it personally to the gang and tell them what to do with it. Florida decided she had to go stop him.

The other four members of the gang were at their hangout counting money they stole off a lady’s purse, which was only 7 lousy cents. Michael came in with the jacket and they were pushing him around for leaving while they were beating up Tommy. Ratbone, the gang leader, said they didn’t have to hurt him, since he was one of them. Michael told them he wanted to quit the gang. They did not take that lying down. Michael said he had too many dreams and had no business with them. They said the only way he’d get out was in a body bag. Florida came in for Michael to go home. The guys were not ready to co-operate on it. When Ratbone noticed Florida’s wedding ring and tried to steal it, Michael jumped on Ratbone and beat him up while Florida held the rest of the gang up with a baseball bat (where did it come from? did it bring it with her or did it belong to the gang?), threatening to break every bone in their body if they intervened. Michael asked Ratbone if he was out of the gang and Ratbone let him out. Then Michael and Florida went home.

A good episode. One of my favorites. The plot deals with how easily one can fall victim to peer pressure and fear, and about how family would stick up for each other. Michael had no intention of joining but wanted to stay alive. I didn’t quite get what they said that the school couldn’t do anything and the law won’t. the school could suspend these kids but again, they’d be spending more time on the streets. The police could arrest them and the court put them in reform school. I liked this one better than when J.J. was in the gang. Michael beat that kid up with Florida’s help and got himself out of the gang..