Welcome back friends and fans. Here we are bringing you to another review of Good Times. This time, Florida goes out for a night on the town with Willona. This is her first time out since James died. Hope you enjoy the review.

Florida was watching a sad soap opera on television. She answered one of the characters  was suffering form paralysis but at least her feet didn’t hurt. J.J. came in and wondered why she was talking to the TV. He asked her if she had something to say to the chair, she answered she had some choice words for the sink. J.J. replied with an inquiry that Bookman hadn’t fixed it yet. When J.J. went to test it, he said in a few months they’d have a glass of water. Thelma and Michael came home arguing because Thelma got some guy to take her to see Earth, Wind and Fire in concert, all while she talks about women’s rights. She answered with “That’s the way I like it”. Bookman came to the door to answer their call to a broken window, which Michael easily fixed weeks earlier. When they told him about the sink only giving one drop at a time, he said he’d put them on his sink list. Florida told him they had him on their list as well.

Florida asked the kids what they wanted for dinner. J.J. and Thelma claimed they had dates, while Michael had basketball practice and his coach said for him not to eat until after. Florida started asking herself what she wanted, while Willona came in told her how her day went. Willona asked her to go out with her that evening but she declined. J.J. overheard their conversation and decided that he, Michael and Thelma should cancel their plans and stay home with her. Thelma’s date came to pick her up but she tried cancelling on him while J.J. called his date to cancel. Florida decided to go with Willona after all for a night of socializing. 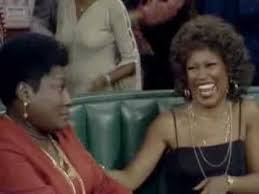 Willona took Florida to a singles bar, where she was pretty well known. Two men at the bar offered to buy them drinks. After one look by Willona, she turned them down. The waitress asked them what they wanted to drink, Willona ordered a 7 and 7, Florida questioned what that was the waitress answered 14. Florida ordered a Rodney Allen Rippy a.k.a. Shirley Temple. They heard a familiar voice from the other side of the bar. After that, Lenny the Looter came in and tried picking them up but was rebuked by Willona, who lit a cigarette up (I never knew Willona smoked, and remember the days when you could smoke inside?). Florida told Willona if she meets somebody and wants to dance, don’t let her hold her back. Willona answered that she would never do that. However, when a good-looking guy came and asked Willona for a dance, she got right up. Florida realized the familiar voice she was hearing belonged to Bookman. 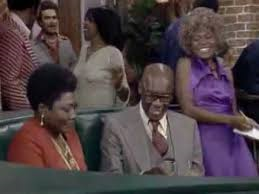 A man named Ben Foster approached Florida and asked her to dance but she declined. Then he offered to buy her a drink. She hesitated at first, but, then agreed. He then went to sit down and talk to her. He told her that was his first time out since his wife passed away. Florida told him that James passed away recently. He stated how tough it is to start over again. He asked her if she had pictures of the kids. She took her wallet out and showed a bunch of them. He did the same with his two kids and grandson. Then she decided to unmask Bookman and he left in humiliation, then decided she wanted to dance with Ben. Thelma and J.J. were home at 2 a.m., worrying about Florida, who hadn’t returned yet. Willona came in asking where she was. Florida finally came home and Willona started asking questions. She bid Willona good night and said she’d tell her all about it in the morning. She told the kids she had such a good time she was going out again the next chance she got and tough chitlins who anyone who didn’t like it. Bookman came to the door and promised to fix the sink the next day, provided Florida doesn’t tell his wife about his night out. The phone rang and she answered with “Good night, Willona”. Then she sang and danced her way into the bedroom.

This episode was good. It must have been tough for Florida to get back on her feet since James died, as for everybody who loses someone. It was also good she met a nice man like Ben, I do think it would’ve been even better if they had a bit of a courtship in future episodes. It was also very generous for the kids to cancel their plans to spend time with Florida, until she decided she didn’t need a babysitter. It’s like a night out was just what she needed.