Welcome back friends and fans to another review of GT. J.J. finds a young and talented singer and offers to become her manager. Hope you enjoy the review.

J.J.’s friends and Michael are rehearsing for a gig that evening, with Willona and Thelma coaching them. J.J., the manager, stepped in and maintained that he would take charge. His first order was for them to listen to Willona and Thelma. Florida came in and J.J. told her this can be their way out of the ghetto. He had the group rehearse for her. Michael sang “Do You Wanna Fall In Love” with the other guys on back-up vocals. Then they went to the talent contest to sign up. Florida inquired where the contest was being held, Willona let it slip that it was at a newly opened bar. Florida rushed down there to get Michael out of there. Thelma informed Willona she said something wrong. 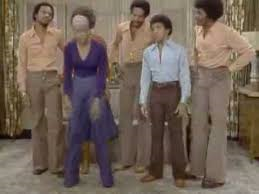 J.J. and the guys went down to the bar to sign up. J.J. introduced the guys with “you can forget about the rest because you’re looking at the best”. He gave their name as Michael and the Dyno mites. When the owner inquired about Michael’s age, Florida popped in and answered he was only 15 and she was taking him home. J.J. tried adding that as a comedic act but Florida then demanded Michael get out of there right away or else. The owner berated J.J. for trying to get his club shut down and the other members of the group quit (this was the last time we saw Michael in this episode). A plump, unattractive young woman named Judy Cohen welcomed him to the losers table. She claimed it rained on the day she was born and her life went downhill ever since. When she was on the line she let everybody get in front of her because she was convinced she would lose so she’d put it off as long as she could. J.J. decided since he was a manager without a group and she was a singer without a manager, they decided they should team up.

Florida was at home feeling guilty for the action she took earlier that evening, Willona and Thelma said they understood she did what she needed to. J.J. came home with Judy and introduced her to the family. They encouraged her to get up and sing while J.J. made a phone call on her behalf to sing at one of the top clubs in the city. He compared her to Aretha Franklin, Diana Ross and Natalie Cole. When they got down to the club, she noticed that a super agent named Jack Simmons was one of the judges and that would  severely weaken her chances. J.J. went up and made a long introduction until the manager came on and announced Judy as the last contestant. She went up and sang “Be A Clown”, doing a superb job. 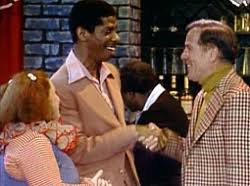 Judy won the contest and Marty Mitchell, the owner of one of the most extravagant clubs in the city, asked Judy to fill in for a gig who cancelled. Jack Simmons approached her about letting him be his agent. Only she had to dump J.J. and if she didn’t she would never get any new gigs (Simmons was a powerful man with a lot of influence and basically had that town wired). J.J. told the family he dumped her and then claimed if he found her, he can definitely find someone else just as talented.

A good episode, although the part about Michael going down to the club wasn’t so smart. It also meant to prove that dreams can come true if you’re in the right place at the right time. It was pretty sad when J.J. couldn’t sign on with Judy and she needed to replace him with that arrogant jerk of a manager to enhance her singing career. I thought J.J. should’ve swallowed his pride and tell the family what really happened instead of claiming he dumped her. It was also too bad he couldn’t catch a long deserved break.