Welcome back friends and fans to the conclusion of yesterday’s episode of GT. Thelma wants to marry Ibe and move to his country with him, but there’s a catch. Hope you enjoy the review. 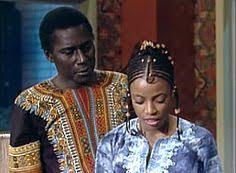 The phone rang and J.J. grabbed it. His buddy Poppo invited him to a party. He said he wanted some beautiful women there so he asked if Thelma could come. He told Thelma that Poppo didn’t have very high standards if he wanted her. Thelma was in no mood for hassling, with a lot on her mind. She needed to tell Florida about moving in with Ibe but knew she would be none too pleased about it. Florida came home in a foul mood, meaning it was not the right time. She was just tired from a hard day at work and was exhausted. J.J. advised her that Florida couldn’t get any worse with the mood she was in. When Florida overheard them, she went to drag ot out of her, after a great deal of hesitation, she finally broke the news about moving in with Ibe. Florida reacted very cooly, and didn’t get the least bit upset. J.J. asked her if she would actually let her go through with it, Florida answered “hell no”. 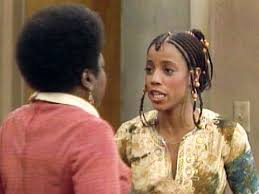 Florida was opposed to a young man and women living together when they weren’t married (we learned that in the episode “Grandpa’s Visit”). Thelma stated that people don’t buy a new pair of shoes without trying them on. Florida answered that nobody buys used shoes either. Michael stated he read that in many African countries a man can have as many wives as he wants. Therefore, marrying him would not be the best idea. Florida stated he wasn’t interested in the African customs, she also insisted she didn’t want Thelma to “play house”. Ibe came by at this moment and informed Thelma he had a change of plans. He spoke to his father earlier and told him about his suspension, his father told him to come home. He then asked Thelma to go back with him to be his wife. 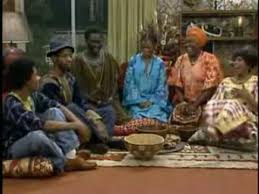 Ibe asked Thelma to marry him and he would give her the best wedding his country ever had. When Thelma didn’t know what to say, J.J. suggested she say she wanted a 10 carat diamond ring. Florida advised her to let Ibe go back home for a while, then if he was still in love with her, then they should do it. She also said she didn’t think Thelma could survive in Nigeria, for it was a different world and different place in time. Michael replied if Thelma survived 19 years in the ghetto, she could’ve survived anywhere. Florida urged her to stay with them and be the woman she and James wanted her to be. Thelma responded that she had to be the woman she wanted to be, that’s why she wanted to go to Nigeria with Ibe. 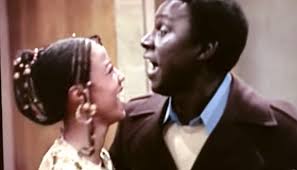 Ibe called for a celebration. He announced he was having a feast at his apartment the following evening, and the whole family, and Willona, were invited. Willona asked Florida what she would be wearing, Florida said nothing. J.J. said it would definitely be a party they would never forget. Florida answered it was because she wasn’t going, for she was so opposed to Thelma leaving. Willona had the kids go inside while she spoke to Florida. She started with a gossip story about a lady in the building. She was the kindest, sweetest woman you’d ever meet but she had a problem with her daughter leaving to get married. In other words, she was talking about Florida. She suggested that Florida should give her all the love and support she could, even if she wasn’t in total agreement. Over at Ibe’s apartment, J.J. showed up wearing an African mask. Ibe gave the family members gifts, calling them his prospective family. Then he put a rug on the floor and had the family sit on cushions while they had their meal. J.J. kept erroneously guessing what they were eating. Ibe taught them about how to eat the food. Then J.J., suggested about the custom of an African man having multiple wives. Thelma tried to make Ibe promise he would never take another wife but Ibe could not guarantee breaking a tradition that went on in his family for years. Thelma decided that it would not be a good idea to marry Ibe and move to his country after all.

A good conclusion to a good episode. I understood Florida’s disapproval of Thelma marrying Ibe and moving far away. It just wouldn’t have been the right time for her. What American woman in her right mind would want to share her husband with several other women. Thelma was definitely in the right to call it off for that.