Welcome back my friends to another episode of GT. J.J. old friend Robert, who was the star of the basketball team, was just cut from the college team. hope you enjoy the review.

Thelma came out and said her room was all set. Michael was outside on the couch reading the paper while she reprimanded him for not cleaning the living room up. J.J. came in with some party supplies and Thelma said to put it out of sight because if Willona found out, they feared that she wouldn’t let them have one. J.J. also announced his old friend, Robert Simpson, was attending. Thelma and Michael reminded him how they were rivals back in high school, Robert got all the good looking while J.J. wound up with the leftovers. J.J. said there was nothing wrong with leftovers if you know how to reheat them. Thelma then stated how she was in charge and if J.J. and Michael didn’t get the place cleaned up, she wouldn’t let them have the party. J.J. stated that before Florida left, she told him specifically he was in charge because he was the oldest, smartest and best looking. Thelma said she knew Florida never said that for she didn’t drink. J.J. said she did something wrong when she had her. That led to another one of their hassles until Willona came in. She announced that she had plans that evening but decided she should cancel and stay home to watch the three of them. They said they were going to the movies that evening so Willona decided that was okay and resumed her plans.

While the party was in progress, Michael was necking with his girlfriend, Yvonne. J.J. said to Thelma they have to change the mood of the party from Soul Train to Sesame Street. J.J.’s girlfriend, Marcia, arrived, hoping to spend the whole night with him. He tried to get Michael and Yvonne to come up for air. Michael told him not to step on his action just because he wasn’t getting any (lol). Robert Simpson (a.k.a. Superstar) just arrived. He was shocked that they were having a big party, as he wanted to speak to J.J. one on one. J.J. then announced it was time to get down and nothing would stop. Nothing, that is, except when Willona came to the door. J.J. tried to explain to her that all of Thelma’s friends broke in and forced them to party. Willona stated she didn’t care if they had a party, as long as they had a chaperone (what was that, J.J. was 20 and Thelma was 19. Therefore, they were adults). J.J. claimed they didn’t need any chaperone. Willona, however, pointed to Michael and Yvonne and interrupted their display of passion. Meanwhile, Robert was over in the kitchen and J.J. went over to talk to him. Robert confined to J.J. that he had just been cut from the team. He spent so much time trying to be the star of the team that he flunked all his classes. Plus, being a basketball star was the only thing Robert ever wanted out of life and he asked J.J. if he ever wanted something so bad. In a laugh out loud moment, J.J. answered he did but she moved to Cleveland. Willona bumped into one of the guests, who said to be careful, for someone her age could get hurt on the dance floor. She asked them to turn up the music and she danced so well she told him to be careful. or he would get hurt on the dance floor. Getting back to Robert, his girlfriend, Ellen, came in with her new boyfriend. This only added insult to Robert’s injuries. 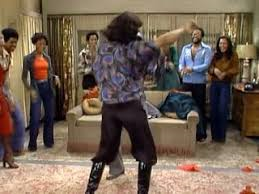 When the party ended and everyone left, they found Michael and Yvonne resuming their affection in the closet. Willona had them say good night before she left herself. Michael tried opening the bathroom door but it was locked (he then showed signs of desperation, think he had to go since making out with Yvonne for so long). It turned out Robert was in there, he overdosed on some pills awaiting death. Michael went to get something to open the door while J.J. attempted to break the door down and Thelma tried pleading with him, stating there were millions of reasons to live.  He said to name one, J.J. replied Lola Borana (who is that supposed to be?). Michael successfully got the door open and J.J. and Thelma pulled Robert out. Michael got the medical book and it said the first thing to do is get him to throw up. J.J. promptly asked Thelma to cook something. Robert asked Michael what he thought of him then, Michael answered he was still his hero, Robert thought he was jiving him, stating nobody likes a loser. Michael answered it wasn’t true for J.J. had many friends. (lol) Michael then said the book stated to keep him awake while Thelma called 911 and she and Michael went downstairs to wait for them. J.J. did everything he was capable of to keep Robert awake, most of the time he was joking with him. He also encouraged him to keep on keeping on. 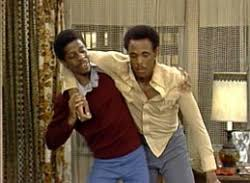 Finally, the rescue squad came to bring Robert to the hospital.  Robert smiled and thanked J.J. for what he did, as well as Thelma and Michael. Michael praised J.J. for making Robert smile. J.J. felt like a hero.

Florida did not appear in this episode

This was a very powerful episode. First, it deals with the sensitive topics of suicide. Second, it can also prove that no matter how great someone is at something, they can always suffer a downfall. You may think someone can have a bright future with no strings attached, but you always have to work for it.