Welcome back friends and fans to another review of GT. Here we are in season 5. There were many changes this season. Esther Rolle (Florida) had left the show (temporarily) and we say hello to Penny, while Bookman becomes a regular cast member. We also get introduced to new opening credits. Instead of seeing a tour around the city of Chicago, we see scenes from previous episodes. Hope you enjoy the review.

Thelma was making dinner while Michael was trying to determine where newlyweds Florida and Carl were. He narrowed his calculations down to Oklahoma City, Amarillo, Texas or Albuquerque. Thelma was wishing they would call. After a hassle over her cooking, Florida finally called. She asked if they were hassling and said she and Carl were in Arizona (which was their destination). Thelma told her she’s been doing the cooking and Florida questioned if they were all right (like they didn’t get food poisoning). J.J. came home and announced a crazy little girl got on the bus. He quickly forgot about it when he heard Florida was on the phone. J.J. got on the phone and greeted Florida with “Hello, Mrs. Dixon”, and asked how married life was. She answered she felt the earth move. Thelma stated she and Carl must have really been in love. J.J. said they felt the earth move (they were at the Grand Canyon). Then he spoke to Carl to say hello, as did Thelma and Michael. 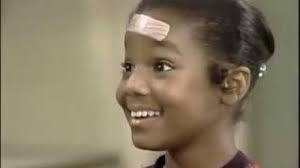 J.J. resumed telling his story about the little girl. She followed him onto the bus and didn’t have the money to pay. The not-so-understanding bus driver wouldn’t let her on so she asked J.J. to help her out. J.J. got up from his seat to get in front of the bus, but a lady took his seat. He started a scene where he asked them should she be allowed to be ejected into the street and have to walk home. He said his personal response was no. He persuaded the passengers to contribute to her fair (even the driver). She had so much money she could’ve taken a cab home. She then came to the door and asked if he was there. Michael asked who she was looking for, she didn’t get his name but described him as tall, skinny and beautiful. Michael said they had tall and skinny but wasn’t sure about the beautiful part. She followed him from the bus and Thelma asked her what she wanted, she answered him. She also made up some extremely wild stories and they noticed a band aid on her forehead.  She gave her name as Esmerelda and requested she could move in. She offered to sleep on the couch but J.J. said she and Michael slept there ( I thought they took Florida’s room after she left). She answered it would be crowded but Michael can say, prompting a “thanks a lot” from him. J.J. suggested they have dinner, then take her home. She agreed to dinner but was loathe to go home. When J.J. want to wash up, she followed him into the bathroom but then he explained that his method of washing up was different than what she imagined. Willona came in and joined them for dinner. Willona recalled last time J.J. was followed home it was by a cat. Bookman came in and reported a child in the building missing, none other that the Evans’s “guest”. Her name turned out to be Penny and she lived in the building with her mother. J.J. finally brought her home and when her mother came to the door, she changed her angry mood to a fake love and concern for her. After J.J. left, Penny’s mother berated her for coming home late and she was unhappy that she disobeyed her. Penny tried running into her room but her mother locked the door. She then took her iron to burn Penny, ignoring her pleas for mercy. 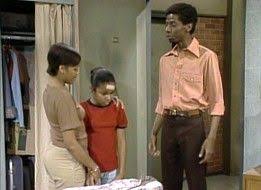 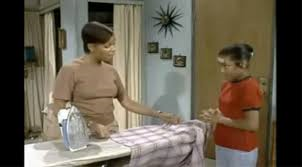 Back at the Evans’ apartment, Thelma was telling Willona that J.J. claimed Penny acted very strange around her mother. She said they shouldn’t jump to any wild conclusions, but again, they shouldn’t cease to get involved when a child is in possible jeopardy. Michael came in and had a poster of Alderman Davis, which they planned to use for dart practice at his school’s carnival. J.J. came home and announced he just landed a date with a beautiful receptionist named Charlene. Penny came to the door while J.J. was getting himself ready for his date. Michael invited her to his school carnival, in which he was the chairman. Willona excused herself to get a costume for Penny, while she asked J.J. to play house with her and her doll. Charlene showed up while J.J. was rocking and singing her doll to sleep. As he and Charlene were leaving, Penny begged J.J. to stay and then started hitting and yelling at her doll. She stated if it were good he would stay. Willona returned with a costume for Penny. When she took her sweater off, she noticed a burn on Penny’s arm. When she asked how that happened, Penny claimed she tripped over her cat while the stove was on, making hot chocolate. Charlene, who was less than concerned about Penny’s injury, got impatient and asked J.J. if he was coming. He told her to wait and she got offended and left. Willona and Thelma then noticed bruises all over Penny’s back. She claimed that she fell down. When Willona asked her who beat her up and did all those terrible things, her mother showed up to take her home. Penny said to her “honestly, I didn’t tell them anything”. She answered “Tell them what, what would you have to tell them”. This aroused a bit of suspicion on their part.

Written by Austin and Irma Kalish

The scenes from the opening credits feature several entries into the apartment by Willona. Michael  punching J.J. in the stomach, then having a pillow fight with him. Thelma being handed a plunger, then sporting her African hairdo. Willona and the kids doing J.J.’s walk around the sofa. Then many appearances of J.J.. We also have Willona at the door blowing party favors. She and Thelma checking out underwear they sold. Bookman doing an impression of John Wayne. J.J. pouring a full pitcher of water in Thelma’s glass. Willona slamming the door in Bookman’s face. J.J. making a fuss over Thelma’s cooking. J.J. getting dragged in the room by Thelma.

A good and powerful episode. This deals with the very sensitive subject of child abuse. What I didn’t get was why Willona and the kids didn’t catch on sooner. I, at least, would have asked Penny why she didn’t want to go home or at least have my suspicions on the matter. I thought there was great acting on the part of Janet Jackson and Chip Fields. Well, tune in next time for part 2 of this 4 part episode.