Welcome back friends and fans to another review of GT. In this episode, Thelma moves into an apartment with some college friends and realizes what a huge mistake she made. Hope you enjoy the review.

Thelma was coming home with her boyfriend, Paul. They had just eaten at a Chinese restaurant and she invited him in. When she went to turn the lights on and he sat on the couch, he said “Where were we, cupcake?”. Next thing we knew J.J., who was laying in the couch, yelled what was going on. Thelma assumed they were sleeping in Florida’s room but they were watching Penny for Willona and she was sleeping in there. Paul decided to leave and Thelma and J.J.’s argument woke up Penny. Also, Bookman came to the door and asked them to quiet down. Thelma asked him to stay out of it for it was a personal matter. In a laugh-out-loud moment, Penny asked him if his wife knew he was wearing her clothes. 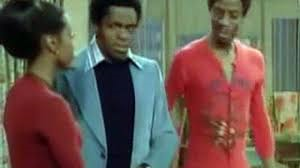 Willona came home from inventory at the boutique and asked what the fussing and feuding was all about. Penny told the entire story from beginning to end. Thelma voiced out her frustrations on how miserable she was and was getting tired of J.J.’s tyrannical ways. He answered if she didn’t like it, she knew what to do. Thelma said that was exactly what she would do. Willona asked if they can talk about it the next day, and then she was moving out. The next day, Thelma came back from a long walk and announced she found an apartment. Three college friends were sharing an apartment and she decided to join them for $50 a month. Willona asked if she would be moving in on the 1st of the following month. Thelma answered she was moving into there that day. 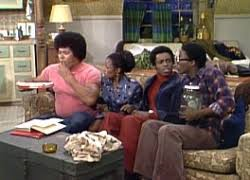 Thelma went to show Willona her new apartment and introduce her to her new roommates. The first one was Alvin, who came to the door only wearing  a pair of jogging shorts and had the personality of a wet shoe. Next was her roommate Karen. Before Willona could introduce herself, Karen said ‘let me guess, you’re Thelma’s mother”. J.J. came in some of Thelma’s stuff and he asked where he can put them. He took one look at Karen and dropped her boxes and went to hit on her. He told her about his artistic talents and that he was an advertising exec. She went on a diatribe on how they promote worthless things that others don’t need and called him a sellout. Willona went to sit on the couch, which was slept on by Bear, the fourth roommate and a big hulking guy. He shook Willona’s hand and she was afraid she’d never use it again. Bear went looking for food and Alvin grabbed his frog from the refrigerator. He explained to J.J. that he was a biology major and offered to introduced Thor, his pet tarantula. Bear wouldn’t have a problem eating that either.

Back at the Evans apartment, Penny questioned if Thelma would ever come home. They explained that she was happy with her new home and life. She wanted to let Thelma know she missed her but Willona and Michael said they wouldn’t want her to know that because it would make her unhappy. Penny found that hard to understand. Thelma came over to say hi and got a warm welcome from the family. However, they lived up to what they told Penny and made it sound like they were happy without her. When she went into her room to get the rest of her things, she saw that J.J. redecorated it for himself. She questioned where they put all her stuff, Willona answered they put it in storage. J.J. added that was because it was cluttering up his room. Thelma then realized it was no longer her room. 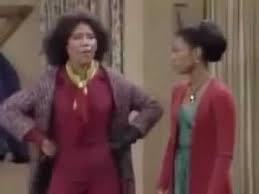 Back at her apartment, Karen announced she made a delicious dinner and they saved some for her. When she asked where it was, she answered the Bear ate it. Alvin told her her food bill for the month was $15, although she didn’t eat anything. He answered they needed to chip in for the Bear. When she went to study, the Bear came out with his radio. She asked him to listen to that somewhere else, he answered he had to go where the music took him. Alvin said her phone bill was $23, and for several long distance calls. She never made any calls like that, but she said they split the bills equally. She then made a fuss because she cleaned the apartment that morning and they all messed it up. Paul came over with a box of chocolates. Bear rushed over to help himself to some, followed by Alvin. Karen came and flirted with him. Karen was wearing Thelma’s blouse and she told Karen to take it off, so she started to right there. When he offered her some candy, Thelma got angry with her and Karen said they shared everything. Thelma pushed her into the candy, ruining her pants. Alvin’s tarantula got loose and that was all enough to scare Paul away. J.J. came over and she told him she left him and Michael and moved in with three weirdos. Then she told J.J. to get all his things out of her room and put all her things in because she was coming back home.

The opening credits no longer showed the skit when Thelma and Willona checking out underwear. It added a skit in the premier episode when Bookman was talking to Penny and had her joining Willona and the kids doing J.J.’s walk around the couch.

A good episode with a touch of realism. Thelma thought she had it rough at home and moving out would solve all her problems. She realized that she wasn’t ready to be on her own and how much she really cared for J.J. and Michael.