Welcome back friends and fans. Thank you for joining me for another review of GT.  J.J. is dating his boss’s attractive daughter but finds out he can’t mix business with pleasure. Hope you enjoy the review.

Thelma tried to wake J.J. up for work. She then commented to Michael on how tired he was lately. She stated he slept through breakfast that entire week. Michael said that was survival instinct. Willona and Penny came over with a project for her geography class. She needed J.J. to help her with drawing a map of the United States. Michael commented she needed it for sure, because she couldn’t draw. Willona told him she said she could draw the villa camerata, though they both knew she lied through her teeth. When Thelma tied waking him up unsuccessfully, Penny made an impression of his girlfriend, Boom Boom Belinda. That woke him up in a hurry (lol). J.J. stated he was so busy at work, it would take him time to get to it. Penny suggested he request an assistant to help him out. After stating it doesn’t work that way in big business, he decided it was a great idea. 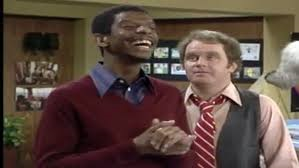 Down at the office, J.J.’s boss, Mr. Harris, asked a co-worker, Warren, to tell J.J. he wanted to see him as soon as he came in. J.J. arrived with a polar bear Mr. Harris asked him to get from the warehouse on the way to work that morning. Mr. Harris informed J.J. that he hired an assistant for him in order to lighten J.J.’s workload. While J.J. was expecting a man, a beautiful young lady named Valerie came to him. J.J. immediately hit on her and even offered to get her the coffee.  He also invited her to have lunch with him. Warren made an interesting discovery when she came into Mr. Harris’s office that he was her father (gulp). Later on, J.J. was expressing his grievances of Mr. Harris to Valerie, which Warren overheard. Warren later told the fact to J.J. about the nepotism between Mr. Harris and Valerie and they both speculated he would get the ax. 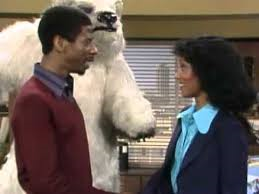 Just as J.J. was cleaning his desk out, Valerie told him that he wouldn’t say anything to her father and have him fired but stated he wasn’t as bad as he said. When J.J. started overpraising him, she said he wasn’t all that great either. When she asked J.J. to tell her about himself, he described himself as charming, witty, superlative and just an ordinary, everyday genius. At that time has friends Head and Poppo came down to invite him to a roller derby. After accepting and getting rid of them, he and Valerie shared a kiss. Willona and Penny came in and asked Thelma if they had anything dirty to bring down to the laundry room. She answered she did the laundry the day before. Willona said she meant gossip (lol). J.J. came home and announced Mr. Harris put him in charge of the new account they were working on. That led to speculation that he only received the honor because of his relationship with Valerie. Head and Poppo came by to pick J.J. up for the roller derby and Poppa hit on Thelma as always “Thelma, Thelma, Thelma”, while she answered,  “Never, Never, Never”. J.J. tried to back out of it, stating he had a date that night with Valerie. He even got a warning form Head that he spent good money on the tickets “I have to get mean if you mess with my green”. Then they recited their song “united we stand, divided we fall, we’re tighter than panty hose two sizes small, J.J., Poppo, Good Old Head, we’re the gleesome threesome until we are dead”. Just as he took the ticket and go off with his friends, Valerie showed up for their date. He had a little problem breaking it off with her, even with a threat by her about his job.

The next morning, Thelma questioned why he wasn’t at work. He replied after the previous night he was left without a job or a girlfriend. Mr. Harris came over and asked what he was doing home. He then told him he got the job because of his talent, not because of Valerie. Valerie came in and apologized for her behavior and they made up. J.J., however, was waiting for Penny’s project to dry up and Valerie started to criticize his job on it. J.J. reminded her that although she was his boss’s daughter, he was the boss around there.

Bookman was not in this episode