Welcome back friends and fans. Thank you for joining me in another review of GT. This is a rather unusual episode in which J.J. has a dream that he turned white. Hope you enjoy the review.

Michael was looking in the paper for a job while Thelma was making dinner. She asked him to set the table and J.J. came in. He announced there was a big promotion at work that he was up for. The job was for an assistant art director and he was confident he would receive it. So confident was he that he took out a bottle of champagne and made a toast with “Look out tongue, look out jelly, here comes the champagne mixed with jelly”. 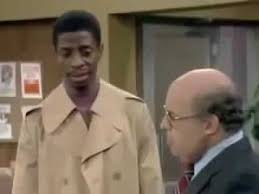 Next day at the office, J.J. hit on a co-worker named Carmen and she made him a cup of coffee. Another co-worker named Raymond came in and asked how was tall, bronze and good-looking. J.J. said he couldn’t be better. Raymond corrected him, saying he was talking to Carmen. Raymond told J.J. that his chances of receiving that promotion were slim to none, mostly because of the color of his skin. Then he asked J.J. if he were the captain of a sinking ship and had only one seat on the lifeboat, would he give it to a white man or a black man. J.J. said that would never happen because, according to Raymond,  he would never become a ship captain. Their boss, Mr. Galbraith, came in and J.J. informed him of a rumor he heard. Mr. Galbraith interrupted him and jokingly stated he and his secretary were only friends. He said that, according to some, he wouldn’t give that promotion to a black man. He answered that, although he was not prejudiced, some clients may be. They may not approve of doing business with black people. 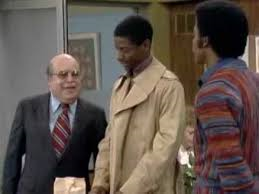 J.J. had a chili dog for dinner and they took a toll on his stomach (heartburn). He asked Michael the same question Raymond asked him. Would he give his one seat to a black man or a white man. Michael answered it would depend on who the black man was, whether it was Papa Jordan (professional boxer) or Idy Amin (President of Uganda), or if the white man was Dr. Soft (who’s that?) or Lester Maddox (segregation governor of Georgia). J.J. stated he’d give it to the ship’s doctor to treat his aching belly. He then lamented to Michael about not getting the promotion and repeated Mr. Galbraith’s claim about playing ball. Michael called it foul ball. Michael told him he was black and he should be proud of it and deal with it. He also reminded him that their father said they should play the game with the uniform they were issued. J.J. also said he advised them to go easy on the chili dogs (funny, we never heard him say either while on the show). Michael excused himself to go to bed while J.J. fell asleep on the couch, wondering what it would be like if he were white. Thelma tried waking him up the next morning with a bit of difficulty. Willona and Penny were at the table and Penny said she would keep her fingers crossed for J.J. receiving the promotion. Willona reminded her if she did she wouldn’t be able to eat Thelma’s cooking and Penny answered “Right!!”. When J.J. finally woke up, he had a white face and the family thought he was joking. He said, it turned out, that the Ebony Prince just became the Ivory Prince. 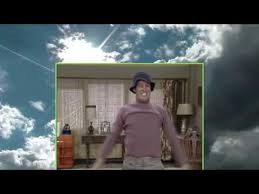 J.J. woke up and said good morning to everyone but nobody would answer. The white J.J. informed him that nobody could see or hear him. He also reminded him of when J.J. wondered what it was like to be white just before he fell asleep. Michael said he wondered what he would tell his friends, now that he had a white brother. Penny said she didn’t care if J.J. looked like a vanilla ice cream cone, she still loved him. When they sat down for breakfast,  Thelma asked J.J. if he wanted some oatmeal, he replied that oatmeal didn’t appeal to him, he would have preferred eggs benedict and prune juice. Willona stated they should still treat him like a member of the family, Michael asked how they would explain it to Alex Haley. Bookman came to the door and J.J. called him the custodian. He asked Willona not to call him “booger” in front of company but she informed Bookman that was J.J.. When Bookman stated he was white, J.J. answered “What can one say”, rather than his trademark line ‘What can I say”. Willona said that one good thing about J.J.’s color change was that J.J. would definitely get the promotion. He answered that would be fabulous. The family wondered why he didn’t say “Dyn-o-Mite” (he actually hadn’t said that since the previous season). When Willona told him he should get going otherwise he’d miss his bus, J.J. answered that she was jivving. Black J.J. reminded him that was jiving with only one v, causing White J.J. to repeat him. He also stated he was taking a cab and Willona wished him luck on getting the promotion. He answered “I shall cope, I am the Evans family’s great white hope”. 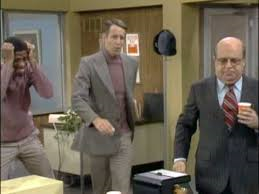 Down at the office, J.J. asked Carmen over for dinner that evening. She refused, comparing his invitation to the film Guess Who’s Coming To Dinner. She also said he no longer had what it takes, a little something called soul. Raymond came in and took one look at J.J.. He stated he thought J.J. would pull something sneaky but that was ridiculous. Mr. Galbraith came in and after a little while, notice the change in J.J.. First he thought he had a new jacket on and J.J. asked Raymond how he liked it and he replied they were pretty bad threads. J.J. laughed and Mr. Galbraith said it was very colorful. J.J. asked Raymond why he didn’t laugh at Mr. Galbraith’s joke, calling him boy. Raymond told him not to call him that. He stated he forgot how sensitive his people was. Mr. Galbraith announced that he was giving Raymond the promotion, for he decided to use affirmative action (reverse discrimination). J.J. tried desperately to prove he was black, making a total mockery of himself. Black J.J. then shouted out repeatedly “I’m black, take me back”. He woke up uttering these words until Michael and Thelma came out. J.J. got up and looked in the mirror, stating “I’m black, I’m beautiful”. He told them about his nightmare and Thelma told him it wasn’t over, for he was late for work. He called Carmen and she told him they just gave the promotion to a woman named Veronica. J.J. stated he would hate having to go through that dream in a  dress. He also decided to play with the uniform he was issued.

Not one of the more popular episodes. It seemed that they overstereotyped many things, with the black race and the white race. The white J.J. acted like a fool overacting and trying to prove he was black. And can someone please explain to me who that white doctor was that Michael would rather offer a lifeboat to than Lester Maddox?