Welcome back friends and fans. Here we are with another review of GT. The Evanses take in a boarder to help with their rent payment. What they are unaware of was his family was hiding him there because he was a witness in a crime. Hope you enjoy the review.

Michael asked Thelma what she was making for dinner and she answered onions with chicken backs. He commented sarcastically it must be one of her gourmet delights. She responded that because J.J.’s hours at the ad agency were cut, they had to cut back on financial expenses. He asked what could possibly be cheaper than onions with chicken backs and she answered onions without  chicken backs. Willona and Penny came in with some pillows they made for the family. Willona asked why they were so glum and Thelma told her about J.J.’s bad news. Penny inquired that he got married (lol). Michael explained about the cutback and he was making less money than before. Thelma stated she bought a dress the day before and couldn’t return it due to observation. However, she added she looked fantastic in it and Michael questioned if it came with a mask (lol).

J.J. came home and, despite the odds, said cheerfully, “toot the horn and ring the bell, brother J is home and all is well”. Then he announced a new plan he had. They would have somebody stay with them and help with the rent. The family was not very enthused, however. Willona reminded him that it was illegal to sublet the apartment. She also warned him if bookman found out, they’d be out on the street. They got a visit from an attractive young woman, to whom J.J. was instantly smitten with. She immediately rejected because they didn’t have the luxuries J.J. claimed to have, like crystal chandelier, air conditioning, a terrace or microwave terrace, amongst others.  A couple came to the door looking to have their father move in. Mr. Dunbar, the new boarder, moved in right away and after his son and daughter in-law left, they commented to each other that he was a witness to a crime and was staying there until the trial, and mentioned how the Evanses better treat him well.

Willona came in and a frightened Mr. Dunbar backed behind Thelma. Then he asked J.J. if he smoked, he politely said no but thanked him for offering. Mr. Dunbar maintained that he asked because he didn’t want him messing with his cigars. Bookman came to the door and Mr. Dunbar howled and went screaming inside. They had him hide from Bookman because they didn’t want him to know he was there. He said you can say that again so Michael repeated himself in another laugh-out-loud moment. Bookman came in to inform them the hot water went off and was being fixed that evening. When he saw the cigars, J.J. told him he just took up smoking. Bookman asked him to try one but J.J. didn’t have a match. Willona got rid of him and Michael had Mr. Dunbar come out. He told him Bookman was their janitor. He asked if he was positive about that, Michael answered they weren’t proud of that fact, but it was true. 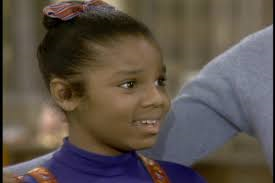 Thelma asked Mr. Dunbar why he was so jumpy and J.J. tried to encourage him to go out for a walk. He stated he was not leaving the house. J.J. asked him to explain his strange behavior. He confided into him, under the condition that he let him stay, that he was a bookkeeper to a participant in a real estate fraud. He was responsible for putting the fellow away and he was hiding from him until the trial. When someone knocked at the door, J.J. calmly answered it but it turned out to be a delivery for Thelma (her new dress). J.J. feared it was a bomb and put it in the sink, much to Thelma’s chagrin. Michael commented how they were all going mad and acted like a thug was going to break in the apartment any minute. Ironically, another knock came to the door. It turned out to be Mr. Frazee, the man he was hiding from. He bribed him with $25,000 to take a trip to Mexico, that way he wouldn’t have to bother showing up at the trial. After that, Mr. Galbraith, his boss from the previous episode, called and offered him his full five days back.

Not a particular favorite of mine. It did, however, have a touch of grim reality. One negative scenario was that Mr. Dunbar put the kids’ lives in jeopardy and should have been honest from the beginning. Might seem pretty fair for J.J. was not at all honest in his ad about the apartment. It was also pretty surprising when Mr. Frazee didn’t kill Mr. Dunbar, rather than give him a bribe.