Hello again friends and fans. Thank you for joining me in another review of GT. This episode has Thelma write a play but learns the hard way about the rules of show biz. Hope you enjoy the review.

Michael was listening to his walkman and singing to the tune of ‘Do You Wanna Fall In Love’ (Ironically, the same song he played in that rock group he and J.J. started up). Thelma came out (wearing glasses) and asked him to pipe down because it was disturbing her concentration. J.J. came home and uttered ‘Jack be nimble, Jack be fast, Brother J is home at last’. Michael could not hear him because he had the headphones on. He asked J.J. to be quiet while Thelma writes her play. That led to an argument between the brothers over who was the quietest. Thelma came out and pleaded with them to let her work. They both replied they’d give her nothing but peace and quiet. She answered if it got any quieter they’d have a rock concert (lol). Willona came over with the happy announcement that Penny was appearing in her school’s Easter pageant, and Willona stated she designed the costumes. Thelma came out once again and announced she was up to the best part in the play. Then she stated she has been writing a journal for the past twelve years, unbeknownst to all of them. Michael grabbed hold of it and read an entry she wrote about Ibe (who remembers him?). Willona snatched it from him and said that was an invasion of privacy. then she started reading it and when Thelma stopped her, she claimed she just wanted to see if she spelled her name right. 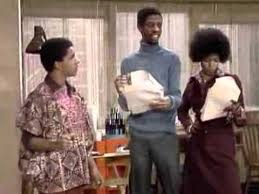 Thelma’s drama teacher, Ms. Flicker, came by with the good news that Thelma’s play has been accepted. He also added that she would make $250 (oh please, even in 1978 that was a ripoff). She also insisted that Thelma keep it unaltered. When Thelma asked when they can start rehearsal, Ms. Flicker replied they still had yet to pick the cast. Thelma said she would use the family for the cast. Ms. Flicker then stated she needed to make some small changes, like changing the names of characters, calling a lady of the evening to a dance hall girl.  Willona came in with some party supplies and Ms. Flicker told her she also needed to change some of the street language, out of fear of offending the audience. 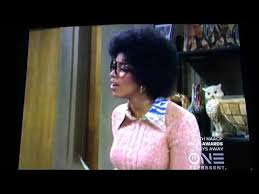 Willona and Penny were over rehearsing Penny’s part for her Easter pageant. Bookman came in with a plumber to fix their sink, while Thelma was expecting Ms. Flicker and a producer named Mr. Nicholson. Ms. Flicker came in, ready to start rehearsal. She gave the scripts out to everyone (including Bookman and Shorty the plumber). During the rehearsal, Ms. Flicker mentioned there were no alcoholic beverages in the script, Thelma sarcastically answered if they should have root beer floats, Ms. Flicker said that was a good thought. It turned out there so many changes, it seemed as if Thelma had to completely rewrite the play. Thelma then retorted to herself and repeated something her father told her. Sometimes you have to reach for dreams and nobody can see you. And those are the kind of dreams that will give you more than a pat on the back by your friends. Those are the kind of dreams that will give you your future, and they’re out there. She concluded with she was one black lady who will reach her dreams, for they are out there. After they all cheered her on and Willona said those were words to live by, Ms. Flicker said she needed to change one word: black. Thelma finally got fed up and said to tell the producer she was not letting him butcher her play. Ms. Flicker said it would be a big mistake and that she needed to compromise, Thelma answered that compromising beyond a point is surrender. Ms. Flicker left, stating she wished she had her guts. The family congratulated Thelma for her integrity an reminded her that someday she will achieve her dreams.

A better episode than the previous few. It was another one of those plots that showed the Evans family was never willing to give up their principles for any amount of cash. I did agree with the cast when they said with determination they can achieve their goals, no matter how high they are. It also displayed a touch of reality on how difficult show biz really is.