Welcome back friends and fans. Here we are with Part 3 of season 6’s premiere episode. The wedding goes on but leads to tragic results for the Evans family. Hope you enjoy the review. 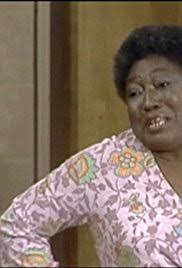 Michael was waiting impatiently for Florida to fix the pants from his rented tuxedo. Michael said he felt funny because he never had to rent a tux before. Florida mentioned she was equally nervous because she never had a daughter marry before, and she also needed to get dressed.  Willona came in and an embarrassed Michael covered his naked legs. Willona reminded him that when he was a little kid, she powdered his butt. When Florida finished mending his pants, Michael rushed inside to finish getting dressed. Willona confided to Florida she felt extremely awkward walking down the aisle as Thelma’s bridesmaid. She thought the guests would expect her to be around Thelma’s age. Bookman showed up in a tux and bearing a gift. He said that was the same tux he wore at his own wedding. Willona joked that he could have had his reception in there as well. He asked where he would be sitting and Willona said he’d be in the first two rows. Thelma came out looking for an eyelash, Florida said she was wearing them both on the same eye, showing how nervous she was. J.J. came out dressed fancy, with a stick and a hat. He said if Ginger Rogers was here, she’d swear I was Fred Astaire. Wanda came to the door crying, she thought the flowers delivered to them were for a funeral. Florida told her that they were for Thelma’s wedding (why didn’t she get invited, I thought she was a close friend of theirs). She said she was happy for her but left crying again. Florida said either way it was a puddle.

Thelma asked Florida to mend her breakaway dress and J.J. asked if she would be wearing it on the honeymoon. When she said yes, he said if Keith saw her like that, she’d need a breakaway dress. Thelma decided that was the last straw and decided to have a showdown with him. J.J. started off with ‘You may be my sister and you may be getting wed, but that don’t change the fact that you’re still a coconut head”. She answered ‘You remind me of a writing utensil, if you stand on your head, you look like a pencil”. J.J. said “Even though you look better than I ever seen you, if the school of ugly gave out a crown, they’d queen you”. Michael got into it and said “last night on TV, I thought I saw your face, but the sign said it was an ugly creature form outer space”. J.J. said to Michael “You may be smart when it comes to books, but looking at your face, I wouldn’t comment on looks”. Florida decided she had enough of it, but J.J. wasn’t done yet. He started on Thelma again with “you may be a pain and the best and may be leaving the nest….” then he hesitated and broke down with how much he would miss her, followed by a hug. Michael joined in with how much he would miss her as well, and they all hugged. They all said that they’d write each other every day (didn’t they have telephones?). Michael said all that writing would bring the post office to a standstill. J.J. said they could do that with only two post cards. Thelma said to look on the brightside that they were all getting out of the ghetto. Florida answered the Lord moves in mysterious ways. J.J. added so did James Brown (lol).

Sweet Daddy and his hoods came to the door to discuss some business. He found out about J.J. losing his job at the ad agency and stated that when his clients don’t tell the absolute truth, he gets hostile. He had his thugs demonstrate how hostile. J.J. answered he hoped they were testing melons to see how ripe they were, Sweet Daddy answered heads instead of melons. He added that Sweet Daddy expected to be paid back because, according to him, money is the route of all goodness. He also stated that he heard through the grapevine Thelma was marrying Keith, a rising football player who was up for a million-dollar contract so they would use him for collateral. Then he gave J.J. a gift he got for Thelma and something for him as well. I was a cast with a jawbone in it, from the last guy who borrowed from him and didn’t pay up. 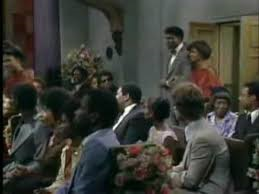 Down at the church, the caterer came to J.J. and informed him there was a shortage of caviar for the long list of guests. He said the cost to accommodate all the guests would cost an additional $150. J.J. asked if he can serve caviar helper. The caterer stated he picked the strangest time to economize. Florida came to him to ask if things were well with him. He answered sheepishly that he lost his job and was getting edgy about paying Sweet Daddy back. Keith came and said Thelma looked gorgeous, then Florida turned around. He said she looked so great he thought it was Thelma. Thelma asked Florida to help her finish getting dressed, and begged Keith not to turn around. while in there, Thelma stated Florida gave her something new, borrowed and blue but not old. Florida gave her a necklace that her mother gave her for her wedding. Thelma said she’d give it right back after the ceremony, but Florida said it was for keeps. Thelma let on how Florida treasured it and she said that was why she gave it to her. Meanwhile, Keith thanked J.J. for the nice wedding he gave them and inquired that it must have costed an arm and a leg, J.J. asked how did he know (referring to Sweet Daddy and his operation). Keith’s best man, Freddie, showed up, causing Keith to berate him for being late. He asked him where the ring was and he searched all over for it, then realized he put it where he couldn’t lose it, in his shoe. Willona came to Florida and presented Penny, the cutest flower girl she would ever see. Penny complained that she wanted to be a bride, and marry a football player. Florida questioned if she was rather young to think of marriage, she answered that didn’t stop Mickey Rooney. Then she asked to see Thelma, or was it bad luck. They said it was only the groom who couldn’t see her. 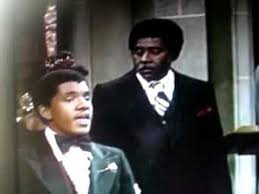 The wedding started with Michael singing “You And I” by Stevie Wonder. The preacher had Keith Albert Anderson and Thelma Ann Evans (the only time we heard Thelma’s middle name) exchange vows and for Keith to kiss the bride. As they walked down the aisle and everybody threw rice, J.J. went to take a picture of them but Keith tripped over him and injured his leg. It was so bad that an ambulance was called and Sweet Daddy said “J.J. my man, you in trouble”.

A good episode, although on the grim and bitter side. It’s also hard to believe J.J. would have caviar, $1,000 for a wedding I’m sure could not possibly include caviar. I mean, if you include every other expense. As I mentioned earlier, why friend Wanda wasn’t invited. There were many other people who would have been expected to be there, including family members. These would include Grandpa Evans and Lena, Uncle Wilbur, Cousin Raymond, what about Naomi and her parents? The negative part was Keith had such a bright future but it all crashed in just a second. It also seemed there was a curse that plagued the family, like when they were just about to move out of the apartment to  go to Mississippi, then James was killed.