Welcome back friends and fans. Thank you for joining me for the conclusion of ‘Florida’s Homecoming”. A bitter and depressed Keith comes back from the hospital with his leg in a cast while Sweet Daddy and his hoods come for their payback. Hope you enjoy the review.

The episode started with skits from the previous three parts. Then it had J.J. putting up a sign over Thelma’s room called bridle suite. Michael questioned why he misspelled it, stating it should be bridal. J.J. replied because she and Keith would be doing a lot of horsing around (lol). He told Michael not to lean on the ladder, otherwise, he’d fall and get hurt. Michael answered he wouldn’t if he fell on his head. J.J. asked him to cut out the hassle, for he’s taken enough of it from Keith, who blamed him for his injury. Michael told him not to get so upset because it was only an accident. J.J. said he went to visit Keith in the hospital, but he refused to let him in the room. He also sent him a get well card, but Keith refused that also. It was evident to him that he wasn’t on Keith’s Christmas list. He was also worried about Sweet Daddy coming after him.

Florida and Willona came in from shopping and Florida also noticed the misspelling of bridal. Willona had the same answer J.J. had about Thelma and Keith horsing around. Bookman came in and noticed that suite was not spelled like sweet. He then questioned why they weren’t packed and ready to move. Florida forgot to mention that they needed to stay because of all the excitement. Bookman stated he rented it to another family, but Florida bribed him with a sweet potato pie and a couple scoops of ice cream. That immediately changed his mind to let them stay. J.J. and Michael came out and insulted him as usual, but Florida told them about him letting them stay in the apartment. Florida said she never thought they’d be thankful for that apartment, but it was better than nothing. 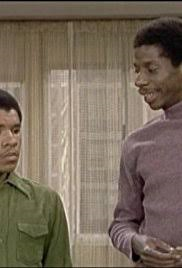 Thelma and Keith came home form the hospital and Keith was still angry at J.J.. The orthopedist called to tell Keith that if he continued to play football, he could not walk straight again if he got hit hard in that same knee. The news embittered Keith even more and J.J. tried his best to cheer up, but to no avail. Thelma even tried to comfort him but he just asked her to get off his case. Michael reminded him that he wasn’t the only victim. J.J. lost his job but still paid for their wedding, while he was planning to go away for college but had to give that up to pitch in and help the family. Florida warned him that she would never let that happen. He’ll just go to college in Chicago and get a part-time job. She also reminded the family that they always stuck out their problems and eventually they will get over this trauma,  and that things couldn’t possibly get worse. 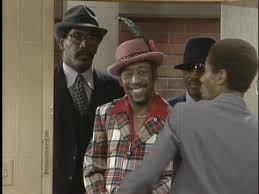 That was, until Sweet Daddy and his hoods showed up. Florida told him she didn’t take kindly to people like him barging into her house without being invited. Sweet Daddy corrected that by having one of his hoods announce they were inviting Sweet Daddy and the other one take his coat off for him. He asked Florida how she enjoyed that kind of protocol. Florida told them to get out of their house before she called the police. Sweet Daddy replied that she should call his house, for that was there they were playing cards and to tell them he said hi. He claimed he was there to make a social call, to give his condolences to the injured one, Keith thanked him but he said he wasn’t the one in mind, that it was J.J. He also said he would confirm that after the hoods got done with him. J.J. confessed to Florida about borrowing money from Sweet Daddy for the wedding and he was charging him 40% interest. Florida called him a robber but Sweet Daddy claimed he was a provider for the needy, but wanted his bread back with extra slices. Florida told him he’d get his $1,000 that J.J. borrowed but nothing more. He said not charging interest would be bad for his image. Michael said he didn’t have one because vampires don’t have images. Sweet Daddy answered how funny that was and how he’d remember it if Michael grew up. He then had the hoods go over to rough up J.J. but Florida said they’d have to go through her first, then Michael, Thelma and even Keith. Sweet Daddy joked that they were the black Waltons. Florida said there was a major difference , the Walton were nice but they were mean. Sweet Daddy answered he and the guys were meaner and after attempting to tear up the apartment, Michael, J.J. and Keith tried offering some belongings to make up for the $1,000. 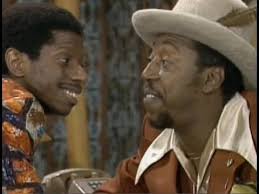 Thelma decided to give up the locket Florida gave her for the wedding. Florida said it was worth everything to her, for her mother gave it to her and she gave to Thelma. But she said if it made him feel like the man he thought he was, he can have it and give her her son. Sweet Daddy stated that his mother had a locket just like it, which reminded him of her. He decided to give the locket back and settle for the money J.J. owed him. Before he left, however, he warned them that if he ever heard anyone mention him showing them kindness, he would come back and raise hell on them in a big way. Florida said bless you to Sweet Daddy, making him groan. Keith gave J.J. five and Florida thanked the Lord that they were a family again.

Penny was not in this episode

A good conclusion to this four-part episode. It was understandable why Keith was so upset about his condition. He shouldn’t have gotten so mad at J.J., for the whole thing was an accident. As I said in my last summary, it seemed the Evans curse would strike just when something great happened to them and something screwed it up at the last minute. Florida certainly had a lot of guts, standing up to Sweet Daddy like she did. There are not many people that could do that.