Welcome back friends and fans. Thank you for joining me in another review of GT. That ruffian Sweet Daddy needs a blood transfusion and J.J. is the only one who can be a donor. Hope you enjoy the review.

Thelma told Willona she didn’t realized why she was tired, for she and Keith went to bed early the previous evening. She said they were watching a movie and when Willona asked what they saw, she couldn’t remember. She decided to leave when Keith came in and knew they wanted to play, but not checkers. lol. Keith came in doing his Bill Cosby impression, asking Thelma what she wanted to do. He then said he enjoyed the movie they saw, but claimed she was tired. A knock came on the door and it was two of Sweet Daddy’s goons and another hood named Leroy Jones (a.k.a. Bad News). Keith said they gave at the office, but it didn’t stop the trio from coming in. They were there looking for J.J. (who else) and Thelma went to call the police but one of the hoods took the phone and broke it in half. Thelma and Keith told them J.J. joined the Army and wouldn’t be back for another five years. Bad News answered “we’ll wait”. When one of the hoods asked Bad News if they should be nice to them, Bad News answered “ain’t I”. Michael and J.J. came in and Bad News told J.J. not to bother taking his coat off because he was going with them. Keith asked J.J. if he knew Bad News, J.J. answered he knew him the same way those who knew Ivan the Terrible and Atilla the Hun. He added that he and the other goons worked for Sweet Daddy. Bad News claimed he was Sweet Daddy’s right hand man. Michael said he looked more to him like his thumb. (lol). Michael then went to call the cops but when the saw the phone split in half, he then said he would write an angry letter to the police. Keith questioned where Bad News and the guys were taking J.J., he replied they were going to the cabbage patch to see the Easter Bunny, lol. 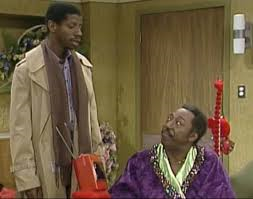 Down in Sweet Daddy’s hospital room, a nurse came in to bring him lunch. She told him to get into bed and have it, she asked if that was an order or invitation. She answered it was just a dream for him. J.J. arrived just as she said if he needed anything to just buzz. J.J. said “Buzz”, lol.  Sweet Daddy asked Bad News and the other guys to excuse him while he converted with J.J. J.J. saw on the hospital report that Sweet Daddy’s first name was Marion. He asked if he can call him that and Sweet Daddy asked if he can call J.J. a hearse. Sweet Daddy then told J.J. he was in dire need of a blood transfusion and since he had a rare blood type and J.J. was the only person he knew who had the same blood type. J.J. asked why he didn’t rob a blood bank, Sweet Daddy answered someone beat him to it and only stole his type,  somebody who disliked Sweet Daddy. He offered J.J. $1,000 for a pint of his blood. 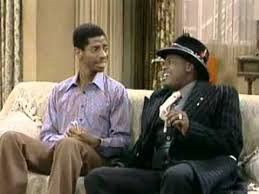 Keith and Michael asked J.J. what Sweet Daddy wanted with him, he said he just wanted him to donate to a blood bank they were opening. Bookman came in and told them the news about J.J. donation to Sweet Daddy and his offer. Willona came in and said it was a black day in the Evans family (no pun intended). Bad News and the thugs came in and Bad News demanded they go outside in the hallway because he needed to speak to J.J. privately. He started hitting on Willona, who called him a chocolate covered Mickey Rooney. He said she was lucky he could take a joke. She invited him to come over for dinner, then added she had a high chair for him to sit in (where would she get a high chair from?, she adopted Penny only a year earlier and was too old for that). Bad News said when he could take a joke, he meant only one joke. 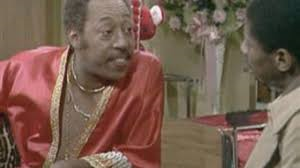 Bad News tried to bribe J.J. with $5,000 to get out of town and skip the operation. J.J. said he couldn’t turn away from Sweet Daddy like that and have his death on his conscience. Bad News said it would only be against them and roscoe, the name Bad News gave his gun. In other words, Bad News would eliminate J.J. if he didn’t follow his instructions. J.J. asserted that they didn’t call him Bad News for nothing. 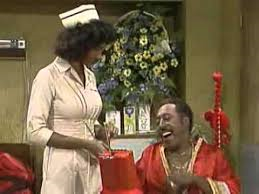 Back at the hospital, Sweet Daddy was on the phone trying to get another donor. He then reverted to praying. He promised the Lord if he gets him a donor, he would donate $10,000 in cash to the hospital. When J.J. finally arrived, Sweet Daddy then promised they would have $20 that very day (creep). J.J. returned the money Bad News gave him and decided to go through with the operation. Sweet Daddy then realized that Bad News had betrayed him with his own money and told him he was in big trouble. Bad News tried to escape but the other goons got him. Sweet Daddy ordered them to put him on a plane, better yet, 3 or 4 different planes. A terrified Bad News claimed he was only pulling a prank. Sweet Daddy pretended to laugh along and told them to get him out of there. Sweet Daddy then conceded that many people would have let him down for $5,000. J.J. added he knew some people who would let him down for nothing. When he asked J.J. why he stuck with him, J.J. answered that if he didn’t pull through, Bad News would take over the ghetto and he was much, much worse than Sweet Daddy. He decided Sweet Daddy was the lesser of the two evils. When Sweet Daddy gave J.J. the $1,000 he promised him, J.J. said he would put it towards Michael’s law school and after he passed the bar, he’d put Sweet Daddy behind bars. Sweet Daddy said he’d be retired by that time. Before they went in for the operation, Sweet Daddy then confided to J.J. that he was frightened of needles.

Written by Anthony and Celia Bonaduce

Florida and Penny were not in this episode

This is Sweet Daddy’s final appearance

Another good episode with a touch of harsh reality. Bad News got exactly what he deserved. It was also pretty surprising he didn’t whack the family for insulting him like they did. Only thing I didn’t get was when J.J. received the $1,000 from Sweet Daddy, it made the family a little better off financially. For the rest of the series, however, it seems like they were still struggling.