Welcome back friends and fans to another review of GT. This episode has Keith hitting the bottle because of his physical condition and inability to get another job. It also results in him, (gulp!) slapping Thelma. Hope you enjoy the review. 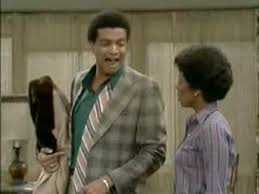 Michael and J.J. were complimenting Thelma’s pancakes, a true rarity on the show. She said she practiced a lot more cooking since Florida went out of town. She also said she made them to cheer up a depressed Keith. Keith came out in a foul mood and Thelma offered him pancakes but he declined, stating he was not hungry. when J.J. finished breakfast, he asked Keith to go job hunting with him. Keith, feeling discouraged, turned him down. Michael told him that unemployment in the ghetto was over 50% and J.J. added the other half were looking for jobs. Keith went into the bathroom and drank a bottle of vodka, then was in a jovial mood when he emerged. Willona came over with some blueberry muffins to cheer Keith up. Keith was very pleasant to her and left her wondering what they meant by him sinking his teeth into them.

Thelma got a call from Keith’s old friend and teammate, Joe. That cheered him up further, until Joe told him he just landed a contract with the Miami Dolphins. When he and J.J. came back, J.J. stated that he started a confrontation with Bookman. Thelma told him that she invited Joe for dinner, causing his mood to be more sour. Keith then headed to the bathroom and pulled J.J. out, while he was still brushing his teeth. Bookman came in demanding to see Keith, to seek an apology for Keith insulting him. J.J. told him Keith was going nuts and apologized for the insult, then apologized for his mother being as big and fat as him. Keith came out of the bathroom in a better mood and J.J. told Michael that he thought he knew what kind of medicine he was taking.

They went in the bathroom to see what was causing Keith to change his moods when he came out of there. J.J. found Keith’s bottle of booze and he had his answer. Later, Keith was having fun with Joe until he had a little too much to drink and insulted Joe’s wife. Things went from bad to worse until Thelma told Keith he was drunk and he got angry and slapped her. J.J. and Michael refused to hear his explanations and he went to apologize to Thelma, she was packing his clothes. Then she told him just because he couldn’t play football it was no excuse to hit the bottle like he did. She also said he needed to find something else to do and not to give up, no matter how hard things get. Then she gave him an ultimatum, she or the bottle. Keith smashed the bottle into the wall and then Thelma slapped him back, making them even.

No official airdate was given for this episode

Florida and Penny were not in this episode

A good episode with a hard-hitting theme. It proved how discouraged people get and causing them to revert to alcoholism and/or drug abuse. It seemed at first Keith may have been bipolar. I wonder somewhat if Florida were there Keith would be in big trouble, never mind James, who would have absolutely killed him. I definitely give Thelma props for hitting Keith back. Many abused women need to do that.